Greenway history tours are an ideal way to spend a few hours on a sociable and outing. Garvan Cummins is a qualified teacher and a historian so has plenty of knowledge to impart to visitors of the Waterford Greenway.  Groups would really benefit from the knowledge of the Greenway Man and Garvan’s service would really be of benefit to schools be it Primary or Secondary especially Transition Year classes, Gaisce and Leaving Cert Applied

The Greenway History Tours include Ballyoile Viaduct, Durrow Tunnel, Durrow Train Station and a number of ambush sites from the war of independence. Historical journey through the County of Waterford leaving the Oldest City in Ireland, Waterford, founded by the Vikings in 914 and finishing your journey in the Norman founded market town of Dungarvan. In between you will pass one of the oldest Viking settlements in Ireland(840’s), past the ruins of a castle, through a number of old railway stations, past many sites of the Irish War of Independence and Civil War, float over three different viaducts, through a quarter of a mile tunnel and look down on the river when the infamous Oliver Cromwell’s army was halted by the raging Mahon waters many centuries ago.  Come along and relive that history with Garvan the Greenway Man.​ 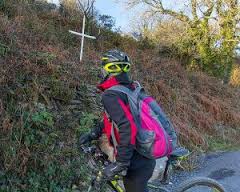 Also weekly two hour tour every Wednesday evening at 7.30pm during the summer months taking in a two kilometre stretch taking in many of the sites explaining the historical and social history of the old railway.  Ideal for individuals or groups or schools.